What Others Say About Gretchen and Bucket List Training 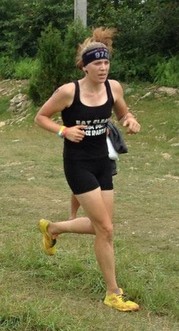 Loryn had qualified for the USA Triathlon National Championships Olympic distance race based upon her performance in a Sprit distance race the year before.  She was toying with the idea of going to Nationals, but didn’t know if she should compete in the Sprint race (for which registration was still open), or the Olympic race, which was closed, but she had a chance of getting in off the waitlist.  I suggested that she put herself on the waitlist for the Olympic race.  She got in off the waitlist, giving herself the opportunity to compete among the best triathletes in the country.  Loryn had a fabulous race, finishing 40th out of 77 in her age group in 2:37:45, improving her Olympic distance time by more than 15 minutes. 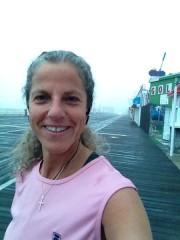 Unlike many triathletes, Linda was a strong swimmer. But she had been plagued by injuries (4 broken bones in 2004, arthritis in her ankle and killer shin splints), and she couldn't even jog 1/10 of a mile without pain. While not overweight, but interested in losing a few pounds, she had accepted that her weight would not change even though she swam 3 times per week. Linda's husband wanted Linda to try a triathlon, since he and both of their daughters were triathletes, and he thought it would be fun to do races as a family. So as a surprise Father's Day gift, Linda registered for her first Sprint tri.  Starting in the spring of 2013, Linda gradually progressed from walking to jogging at a 14 minute pace for 3.2 miles, to completing two sprint triathlons, her first 10K run, and recently finished a 5K run in 31:31, just over a 10 minute pace. And as a by-product of training for her triathlons and runs, she's lost more than 25 pounds. Next up in 2014 - her first Olympic distance triathlon, that includes a jump off the Cape May-Lewes Ferry!

“Since I started working with Gretchen, I am actually really enjoying biking and looking forward to not being 'back-of-the- pack'.  I am also looking forward to becoming a confident rider with good bike handling skills.  Learning to ride in an aero position is going to be a challenge, but I'm glad I'm going to be working on it before the racing season begins.  Gretchen's coaching and guidance was what I needed to get over feeling like I had no idea what I was doing.  I thought I was just going to be slow forever, but now I'm optimistic about how much I can improve. Like I said, I am actually really liking the bike and looking forward to the workouts now!"
--Natalie, age 30

Ready to Get Started?

Have questions? Please contact me for more information, gcooney@comcast.net.

Not sure if customized endurance coaching is for you? Contact me and find out!

Check out my FAQs to learn more about my customized endurance coaching programs and training plans.